Tanzie Tran enters the field with lots of positive energy! 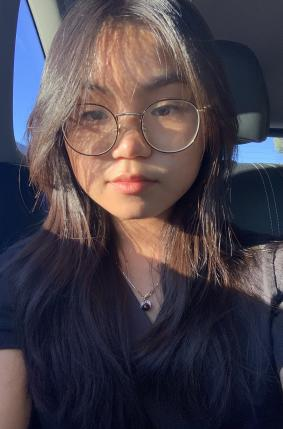 SAN JOSE, CALIF. – Tanzie Tran, a sophomore at Silver Creek High School, is the treasurer for the VSA (Vietnamese Students Association) and is very active with many other clubs during school. She is very bright in everything she does!

As the treasurer for VSA, Tran is busy with many responsibilities. With VSA, most likely being the largest cultural club on campus, there are many events and activities for the club officers to help prepare and lead. Tran says, “Being the treasurer for any club essentially means having to handle club funds or anything that is money related towards the clubs: all the purchases the club makes, finding fundraisers to collect funds, depositing money, etc.”

Tran believes that being a club officer can help people with many skills. She encourages juniors and seniors to apply for club positions, even freshmen and other sophomores. “I strongly believe that people should run for officer positions because it doesn’t hurt to try.” Tran exclaims. “You either walk out of the interview with nothing, or the position. There aren’t any downsides to it, but plenty of benefits such as having leadership experience and some knowledge for future interviews.”

As an active member of many clubs, she enjoys them very much. Tran is committed to the clubs that she is in right now along with the friends that she made in each of them. Clubs that she is an active member in are VSA, Key Club, Crochet Club, and UNICEF. Tran states, “I love performing for VSA during the Winterfest, going to FRN for Key Club, talking to my friends in the morning in Crochet Club, and participating in Treats for Troops in UNICEF.”

Every year, VSA performs at a significant event for the school, putting on a show that is both thrilling and spectacular! Winterfest is an annual display of Silver Creek’s outstanding residents and organizations. It features a wide selection of captivating performances from several venues, including singing and diverse dance styles.

Key Club participates in numerous fundraising events! The Fall Rally North, or FRN, is the club’s most important event. Key Club members from all over North California can network and raise funds for the Pediatric Trauma Program at FRN at the California-Nevada-Hawaii district’s annual spirit rally at Six Flags. At the Fall Rally, the club is able to support programs while making new friends.

UNICEF raises funds for charities, advocates for global issues, and volunteers for children. Treats for Troops is one of the most exciting events in which UNICEF participates. Before Halloween, the club collects candy from anyone who wants to help with the operation and donates it to Treats for Troops. Treats for Troops, a collection initiative, allows nearby businesses to exchange children’s extra Halloween candy for treats. After the candy has been collected, it will be distributed to deployed service members and veterans. Allowing businesses to interact with the community and assist the military. With this event, the club assists the military while also making many other people happy!

She has many inspirations in life that help Tran pull forward throughout high school. One of the biggest things that inspire her is the idea of helping others. She states, “I know for myself that if I see my own friends succeed, I feel a sense of happiness, and so I apply the same idea to myself!”

For her own time, Tran has some hobbies that many others can relate to! Such as listening to music, specifically K-pop, as well as drawing. Even as Tran says that she is starting to get the hang of drawing, she believes she will get better at drawing through practice and time.

Tran is really keen to balance her academic work and extracurricular activities in the future, while still supporting and contributing to her clubs.